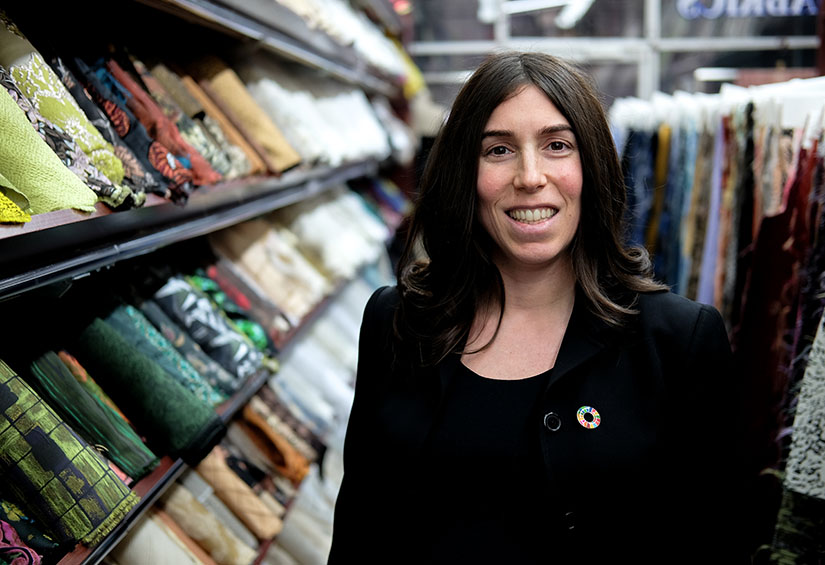 Queen of Raw is a marketplace for textile producers from across the globe to sell unused textiles to brands and creators. By doing so, it saves billions gallons of water, keeps 2 million tons of textiles out of landfill, and turns pollution into profit. The American based enterprise has now become a market partner of Women on Wings. By providing a platform for selling unused fabric to social enterprises in India, Queen of Raw strives to have serious social impact.

Solving world’s water crisis
Chemicals from textile production are destroying our drinking water. Textile production is the second biggest polluter, right after oil. One cotton T-shirt takes a mind-boggling 700 gallons -or 2,650 liters- of water to produce (an organic cotton T-shirt is ‘only’ 10 gallons -or 38 liters). Multiply that by the two billion T-shirts sold annually across the globe, and one can see the impact this has on the environment. Stephanie Benedetto, CEO & Co-Founder of Queen of Raw, and Phil Derasmo, CTO & Co-Founder of Queen of Raw, are on a mission to solve the world’s water crisis. With a family in the business for over 100 years, Stephanie saw the problem first hand and together they built the solution: a platform for businesses to sell their raw fabric (hence the name) instead of destroying it. If the textile industry does not make a change, by 2025, two-thirds of the entire world’s population will face shortages of freshwater from textile production alone.

Doing well makes good business sense
As a global market place, Queen of Raw now offers access to market to the business partners of Women on Wings in the textiles sector. By providing a platform to sell their unused fabrics, Queen of Raw contributes to improving their business results and to rescuing the fabrics from being burned. Which is often the life’s end of many unsold fabrics. While Queen of Raw strives to have serious social impact, it was important to Stephanie for it to be a for-profit business, because bringing about meaningful change requires the participation of C-suite executives. Says Stephanie: “We need the CMOs who are worried about storytelling around good work, the CIOs and COOs who are responsible for technology, procurement, and managing the supply chain day-to-day, and the CEOs responsible for setting the corporate agenda. That’s the beauty of how we built our business. We have the economic piece so our customers are not just doing well for good’s sake, but because it makes good business sense.”

Raising awareness
Queen of Raw offers a solution to the more than 120 billion US dollar worth of excess fabric sitting in warehouses around the world. Queen of Raw has already saved over one billion gallons -or 3.8 billion liters- of water while saving businesses millions of dollars with supply chain efficiency. An optimized supply chain is the solution for people, for planet, and for profit. Stephanie’s ultimate goal is to get people -business owners and consumers alike- to stop and think: “Wherever you are, whatever you are going, the materials in the space you are in -the office, a car, a plane- did not come from nowhere. If everyone thought a little differently about one T-shirt, about sourcing sustainably one thing, that would have a massive impact.”

Textile pioneers find recognition and support
After finding market fit with its B2C marketplace, Queen of Raw saw an opportunity in the B2B space. It created a private portal to cater to large volume buyers and sellers and launched a partnership with SAP. And for Queen of Raw, fashion and textiles is just the beginning. Looking across industries and around the world, it has found the US dollar 1 trillion thread to solve the world’s water crisis. And the world believes in the innovative approach: Queen of Raw has won many awards, like the Grand Prize WeWork Creator Award and LVMH Innovation Award. Stephanie also is a Cartier Women’s Initiative Laureate.