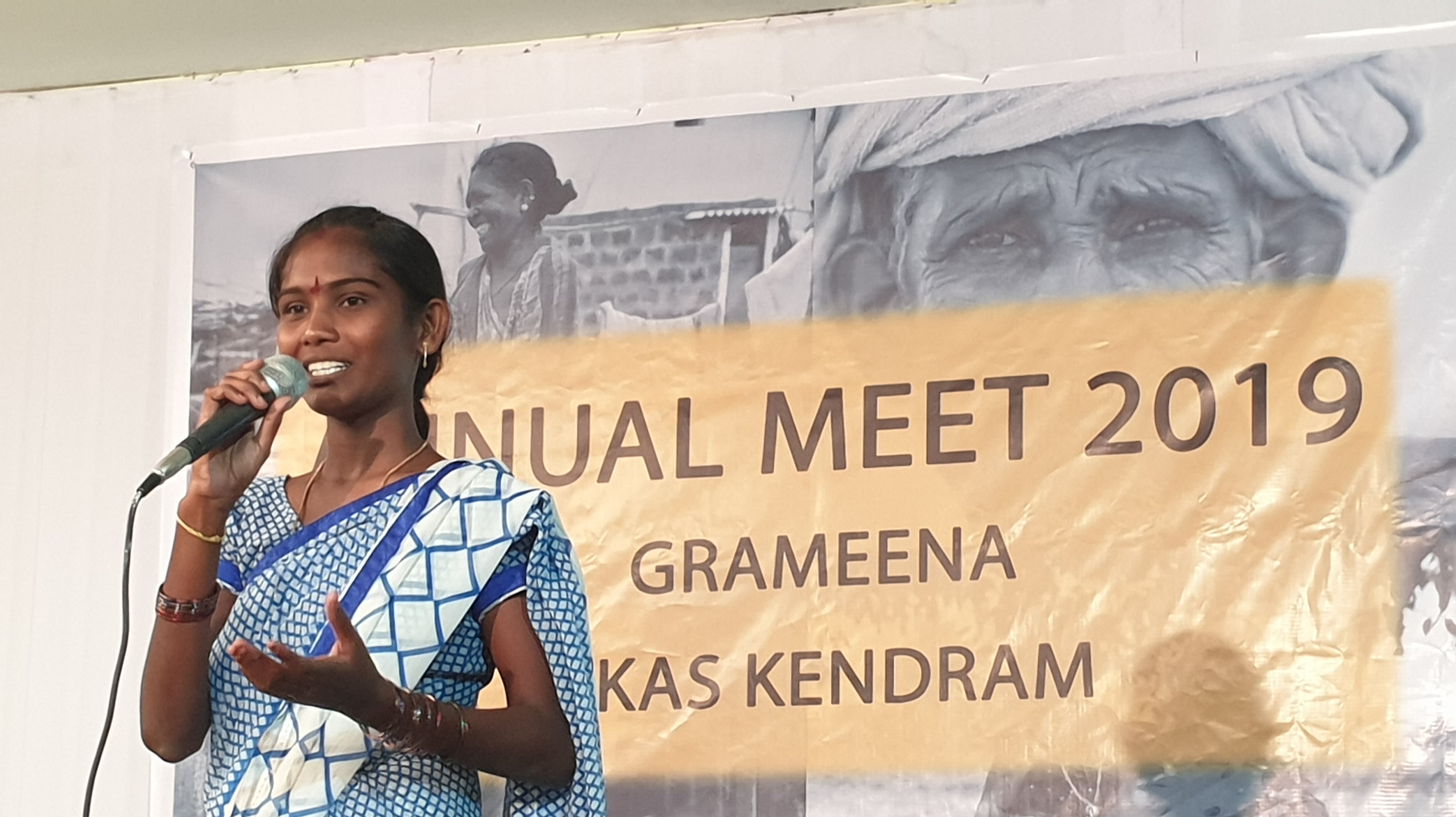 Imagine your crops depend on that one rainy season in the year, Monsoon. And this year Monsoon comes two months late. Ramtulsi, a female farmer from district Kadappa, Andhra Pradesh, was extremely happy when the first rains finally came on August 22, 2019. A Women on Wings team visiting Kadappa that day, witnessed her sheer joy. Also they witnessed her resilience and willpower during the Annual Meet 2019 of Women on Wings’ business partner Grameena Vikas Kendram (GVK), during which Ramtulsi shared with the audience how Zero Budget Natural Farming had changed her life.

Persistence results in healthier crops
Small and slender she may appear, but Ramtulsi is a powerhouse in herself. At 23, she is the proud mother of a daughter, aged 3, and a baby boy of a few months. She came to GVK’s Annual Meet to share how she started a new way of farming some three years ago. It was then that GVK came to her and her husband’s farm and explained the concept of Zero Budget Natural Farming (ZBNF). Not understanding it at first, they declined the offer. But GVK was persistent, knowing that this way of farming would ultimately benefit farmers, and also nature. So they kept coming back to explain more, and one day Ramtulsi decided to give it a try despite of the fact that a first year of ZBNF would show lower yield, but convinced that this method would not only give healthier produce, but also a healthier environment for herself and her husband to work in.

Natural farming in own backyard
As expected, the first year showed indeed a slightly lesser yield, but the second year showed already a big improvement. The yield had returned to the level of before ZBNF, but crops now gave a much better profit. Ramtulsi looks with confidence to the results of this financial year, despite the fact rains came late. Seeing the positive effect of ZBNF on her own crops, she started thinking about the fruits and vegetables she bought from the local mandir (market). From the farmers she learned that those were treated with chemical fertilizers and pesticides, sometimes with as many as five different sorts. Ramtulsi no longer wanted to give her family these fruits and vegetables, so she decided to also use natural farming in her own backyard. With ten other women from her village, Ramtulsi now grows a dozen of vegetables, completely according to the principles of ZBNF.

Impacting People, Planet, Profit
Grameena Vikas Kendram envisions a transformed world wherein rural communities live in harmony with each other and nature. It unites corporates and NGOs to break through gridlocks, encourages thoughtful solutions and achieves change in society. By stimulating innovation and promote processes which are sustainable, socially inclusive and gender-sensitive, it supports critical masses of rural poor. That this approach works, was proofed at GVK’s Annual Meet 2019 during which many farmers shared their positive experiences of better yields and increased incomes, and the management shared the growing results in turnover and in number of farmers engaged and (international) partnerships. Women on Wings and GVK are collaborating since 2016 on the growth plans of the social enterprise.