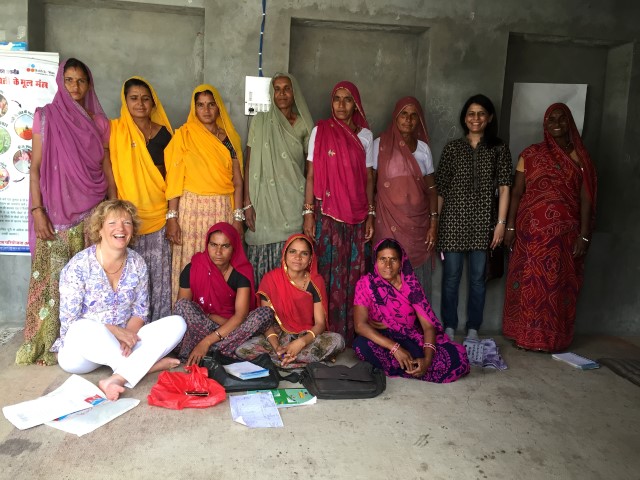 One thing is certain: reality is always different in India than the schedule in my agenda. Every day – no, to be honest every hour – people are re-prioritizing due to what really seems important at that point in time. People worry less about plans and schedules; what really matters are the results.

Role model Meenu
Last week Supriya and I worked for 2 days with Maitree, a producer company set up by SRIJAN in the district Tonk in Rajasthan. After a 2 hours discussion at the office we were suddenly invited to interact in a paravet meeting with 15 women. One of the paravets who was also the president of the governing board for Maitree, is still in my mind and heart. Meenu, a 25 year old lady, very passionate about her work and responsibilities. A role model for female farmers. 25 and still no children, by choice, an exception in rural India.

Waiting for 4 hours
Next to the work visit to Maitree, Supriya and I worked for 2 days with Aapni Saheli, a prospect and producer company set up by Pradan in three districts of Eastern Rajasthan, between Agra and Gwalior. The first day was a Saturday, a normal day to work in rural India, and also for office people. After an introduction in the office, we went to a village to interact with the women who were producer members of Aapni Saheli. They had been waiting for 4 hours already! We did not know, nobody told us; it felt disrespectful from my view. But the women did not seem concerned. They were just happy to meet us and share their stories.

Rama Navami
After this meeting there was a lunch at home with Sanjay, the local Pradan ‘CEO’. A special lunch because Ram Navami was celebrated; an important day in the Hindu calendar. It is a day of sharing and giving – all young, unmarried girls receive gifts and people open their kitchens to friends and strangers. Because of this celebration the CEO was not available for the afternoon. But he turned up in the evening to continue our working session. No problem, we are flexible ;-)

Sunday, cricket day
On Sunday, we entered the office at 9 AM, as agreed the day before. And yes, the whole team was present to continue. We later found out that the Indian team members had skipped their usual Sunday cricket match for the meeting. At lunch time we moved to a nearby restaurant; a big screen showed the cricket final World Cup match between Australia and New Zealand. Everybody watched in rapt attention. At that moment I realized that this team skipped not only their own match but also watching the World Cup finals to be in a meeting with us. India had lost in the semi-finals two days before. For sure they would have skipped our meeting if India had played the finals.