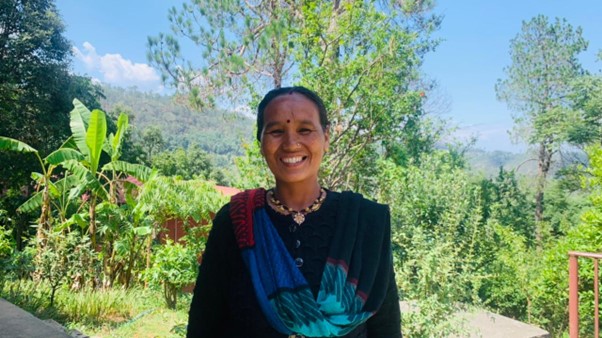 Forty-year-old Lalitha got married at the age of thirty. Not quite the average age to get married in villages in the Himalayan Kumaon region where she lives. But earning a good income at Women on Wings’ partner Avani positively ‘delayed’ her marriage at least ten years. At seventeen Lalitha started working at Avani, right after finishing the 12th class Standard.

Strong sense for independence
Lalitha was happy to talk to the Women on Wings’ team that was working at Avani’s campus last May on reviewing the social enterprise its business strategy post the pandemic. As a girl, Lalitha already had a strong sense for independence, and she had dreamt of learning to drive a car herself and become a policewoman. When a team of Avani came to her village to install solar panels some twenty years ago, she came to know all about the work Avani is doing. Avani works in over hundred villages in the Kumaon region in the lower foothills of the Himalayas with activities that focus on livelihood generation through revival of traditional crafts, appropriate technology, and farm-based activities. The core of all activities is women’s empowerment, natural resource management and respect for traditional knowledge. After successfully passing her exams of 12th class Standard, Lalitha joined Avani as a weaver in its weaving unit.

New skills add to self-confidence
At Avani, she got and took the opportunity to further develop her knowledge and skills. So next to weaving which already gave her great joy, Lalitha has learnt about supervision, leadership, and computer skills as well. Gaining so many new skills, added to her confidence and independence. Seeing Lalitha’s happiness coming from her self-sufficiency, made her parents decide that they would not push her into what would be the local tradition; an arranged marriage before the age of twenty. Said Lalitha smiling: “I got married when I was thirty years old. I have a love cum arranged marriage. I remember my wedding day very well, I was very happy, but also I felt jitters.” After marriage, initially she lived with her husband’s family. According to ruling customs, women mostly leave their parents’ house after marriage and start living at their in-laws’.

Providing for family
The happily married couple became proud parents of one daughter. But then Lalitha’s husband got paralyzed which totally turned their lives upside down. And again against local traditions, Lalitha’s elder sister and her husband took them in and they started living together. Continues Lalitha: “My work at Avani not only makes me happy because of the independence it brings, but also because my income provides a good education for my daughter and medicines for my husband. I have complete control over my earning. Today I have no more dreams for myself, but I do dream of a good future for my daughter. My husband mostly stays at home, but I am happy when he can do little work every now and then.” Her husband is very supportive, happy and proud that his wife can earn for the family.

Impacting community
The impact of Lalitha’s work does not stop at her family’s house. As a role model to other women in her community she certainly impacted them as well as their daughters. Many other women now see the importance of educating their daughters. And school dropout girls who mostly used to get married at the age of 16-17, now found an earning opportunity in their villages which makes them marry at a later age.
The Women on Wings’ team is very grateful for Lalitha’s openness. When asking her a final question about if the pandemic had affected her family, Lalitha happily replies: “Nobody got corona in my family, and we had sufficient income with the help of Avani and farming. We’re all good and looking at a brighter future.”

← FY 2021-2022, a year of revival and resurgence
Enriching to work with social enterprise in India →

Counting down to our 15th anniversary!