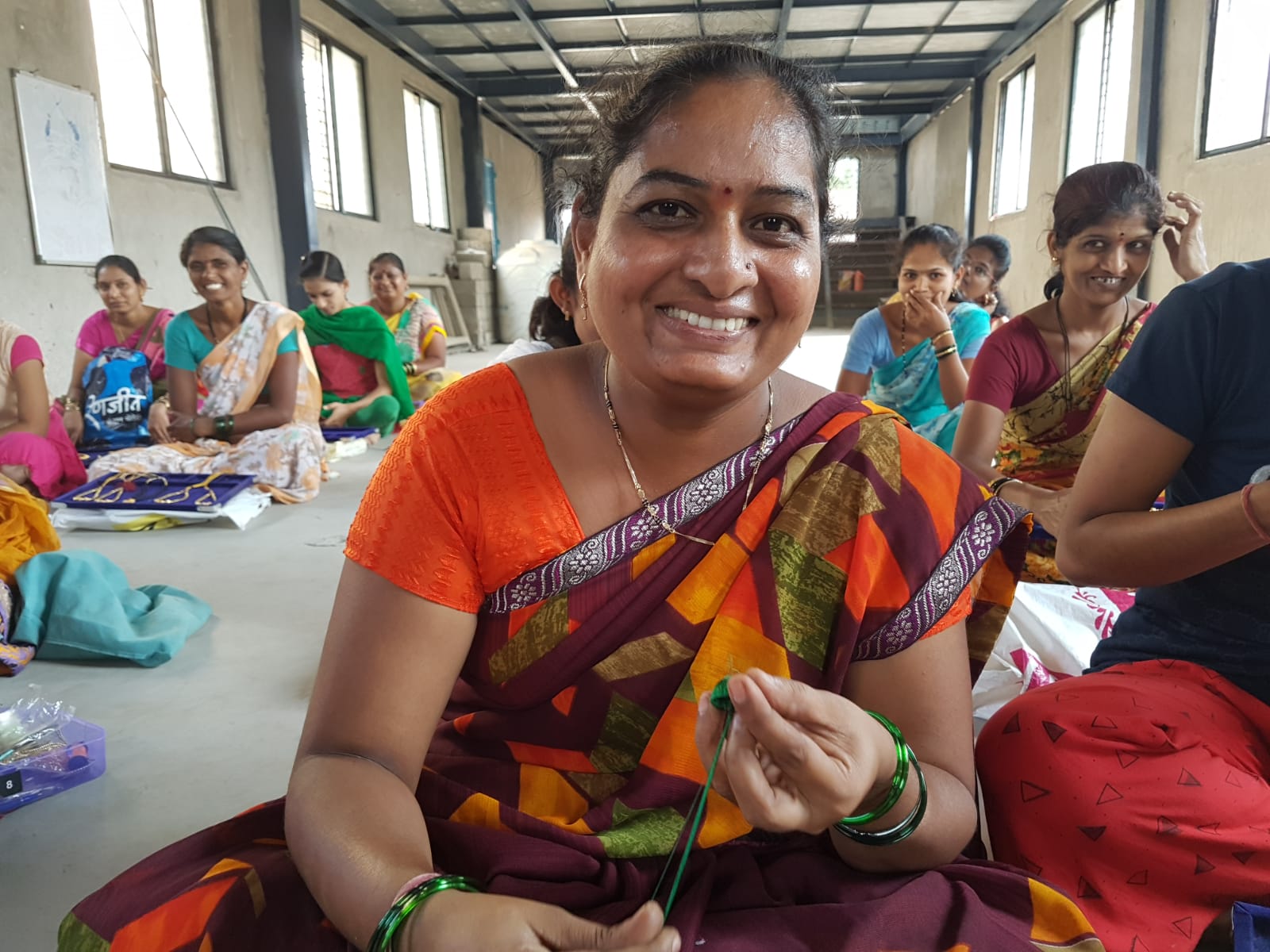 Preeti Dipak Jirage has eyes that spark happiness, pride and strength. During a conversation with a Women on Wings team, she proofs that spark. Preeti is part of a cluster that produces Kolhapuri jewelry for Women on Wings’ business partner Kalapuri, and she turns out to be the spokesperson of that cluster, eager to share her own story and inviting the other women to join in the conversations.

Raising the girl child with independency
Preeti got married at the age of twenty and has a good husband whom she fondly refers to as her life partner. The only negative side of getting married according to Preeti was: “The fact that I had to leave the family that I was born into and had known for twenty years as my world. Then I shifted to my husband’s family, and I had to get used to a new world.” “And that I to change my family name to his’”, she adds laughing. This proofs the independency that Preeti was raised with by her parents. As a young girl, she already dreamed of being successful and independent. Her husband is very supportive to Preeti going to work. She loves meeting the other women of the cluster and her independency makes her a wonderful role model for her children and other women in her community.

Empowered women become role model
Over the years, the Women on Wings’ team has met many women artisans and farmers connected to the business partners that the social enterprise collaborates with, but not often did the team meet women who were raised by their parents that having independency is important for women. And Preeti is no exception, also the other women in her cluster have similar stories. Some of them finished not only the 12th class, but also pursued follow up studies, like an MBA, supported by their parents. However, where the women with MBA diplomas could have had careers in the corporate sector, they choose to work in the handicrafts sector and use their knowledge to help develop their villages through the clusters, and motivate other women in their community.

Sisterhood and equality
The women not only come together to produce the most beautiful jewelry for Kalapuri, which provide the women with extra income for the family household, but also to discuss the news and day to day issues, like about husbands, in-laws and their children’s education. The feeling of togetherness is great, and the women share an inspiring sisterhood. Preeti shares: “I save my income to make sure my children stay healthy and get the best education.” “Being the decision maker of my own savings, it also pays for some luxury for myself every now and then”, she adds smiling. The Women on Wings team leaves Preeti and the other women with a happy feeling. Women on Wings’ business partner Kalapuri confirms that Kolhapur is quite a developed place and that they work with many similar empowered clusters where equality between husbands and wives seems pretty normal. Kalapuri is a wonderful example of social entrepreneurship, equally led by husband Atish and wife Aparna Chavan.