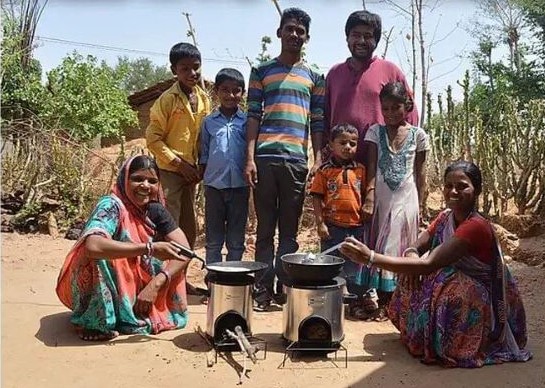 Grassroot innovators
The Mumbai based social enterprise was set up in 2011 and managed to become India’s largest cook stove selling company with over 1.2 million stoves sold across international markets. Its founders Neha Juneja and Ankit Mathur were on a mission to develop everyday products that could improve quality of life for families in rural India who are used to cooking on traditional – very unhealthy – mud stoves. Its Greenway Smart Stove is a result of co-creation efforts with user communities across five Indian states, where the design team of eight (including the co-founders who both have an MBA with M.E. in mechanical and production & industrial engineering) lived and worked with communities to align their technical goals with user requirements.

Adding to better health and climate
Using a traditional mud stove for an hour is equivalent to smoking 20 cigarettes along with eye, skin irritation and other ailments. Due to inefficiencies, traditional stoves require copious amounts of fuel, typically firewood for which communities often have to cut trees damaging flora and fauna. Emissions from these stoves is also a significant contributor to climate change. It is believed that Greenway’s biomass cook stove produces 70% less smoke.

Generating income
Next to health and climate, the stove also contributes to saving time and income. Normally, families – mostly women and girls – spend a significant portion of their time and income on wood collection and fuel purchase for traditional cooking stoves. The Greenway stove saves a lot in fuel and in time which results in more productive hours for women and girls. Hours which can instead be used to generate income or study. The cook stoves are sold by a network of almost 500 rural women. The joint goal of Women on Wings and Greenway, is to expand the network of sales women.