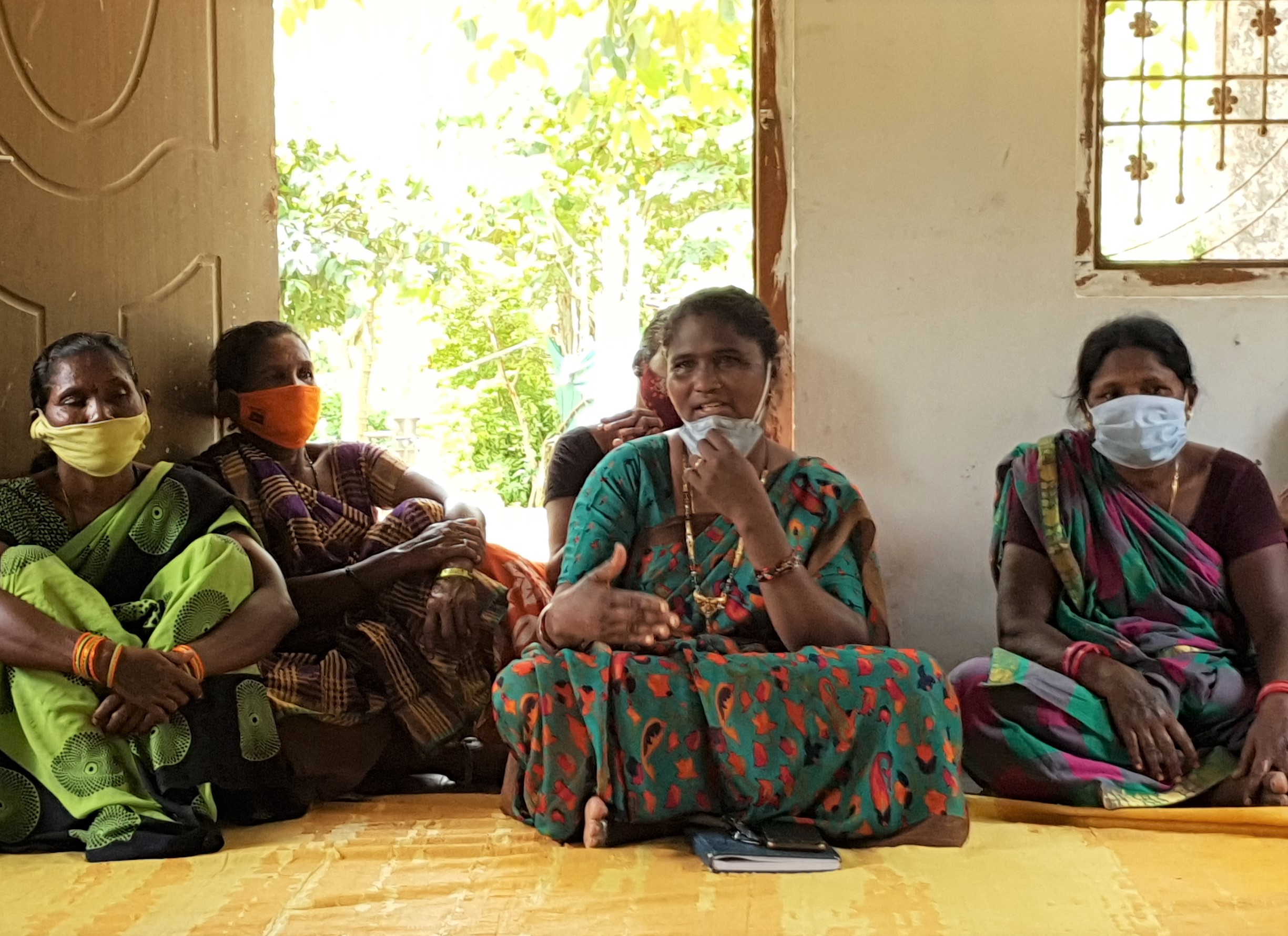 Imagine your biggest dream as a child is to have a good house. Because yours is not. Chura Gangamma (picture, center) shared with a Women on Wings team that visited her village in the Visakhapatnam district, that she made her dream house out of sand when she was a young girl. It even had a fan. Today, she owns a good house, with a fan, a toilet, running water, and a kitchen garden. Thanks to her determination to bring about change.

Education key for better future
Not being educated herself, Chura Gangamma (Chura) started working at a very young age when her father passed away. Being the eldest of three siblings, Chura took the responsibility to start earning an income to support her family. By the time she was a teenager, her new dream was to provide for the education of her brother and sister so they could get better jobs than she had. And their income could pay for a good house in future. And she succeeded in fulfilling her dream, both completed their education with good marks. Now her brother works in a private company and her sister has a respectable job with the government.

Work is empowering
Chura radiates joy and pride when she shares with the Women on Wings team that she was lucky to get three children: two girls and a boy. Says Chura: “All my children have been educated. My son has an excellent job at Indian Telecom Industries, one of my daughters studied nursing and works as midwife. My other daughter is married.” “A love marriage,” she proudly adds. Chura’s husband has always supported her. Not always common in traditional tribal communities. She loves to work and not just for the sake of earning money. Eager to learn and develop herself, she never was afraid to start something new and challenge herself.

Mobilizing other women
Chura has played a significant role to mobilize women to organize themselves in Self Help Groups (SHG). First as a member, then taking the lead to build her SHG, even stepping out of her own community to mobilize more women to organize themselves. When the Women on Wings team asks her how she had come to do this work Chura replies: “I had seen the change in my brother and sister when they got educated, and I felt the change in myself when I worked and took responsibility of my SHG. I felt proud, empowered and incredibly happy. I take responsibility to bring change to other women as I want them to feel the same as I do.”

Mobilize men too
Leaders in her community also saw Chura’s capabilities and she was appointed sub-committee member of the National Police Mission. There, she gained a lot of knowledge and experience. Chura now uses all that she gained over the past years to empower more women. And she thinks further than just empowering women. Seeing the success and impact of her SHG, she is now thinking of starting a SHG for men. Says Chura: “Women SHGs work, so why not mobilize men in SHGs? If they too come together, a lot can be realized!”

Support from Kovel Foundation
Chura’s SHG and many others get support from Women on Wings’ partner Kovel Foundation (Kovel). Kovel’s mission is to improve the quality of life of forest dependent tribal families in India. It supports these families in e.g. the collective marketing of forest produce, like tamarind, adda leaf, hill brooms, etc.. Also, Kovel organizes collective initiatives like training, skill development and marketing of Non Forest Timber Produce (NFTP), agri and allied produce, and many more. Kovel also focuses on promoting Farmer Producer Organizations with tribal families in general and tribal women in particular. Since summer 2021 Kovel and Women on Wings are collaborating on their joint mission of increasing the number of jobs and create livelihood opportunities for women in rural India.

@Image: Chura – in green orange sari – sharing her story with teams of Kovel Foundation and Women on Wings during a field visit in August 2021