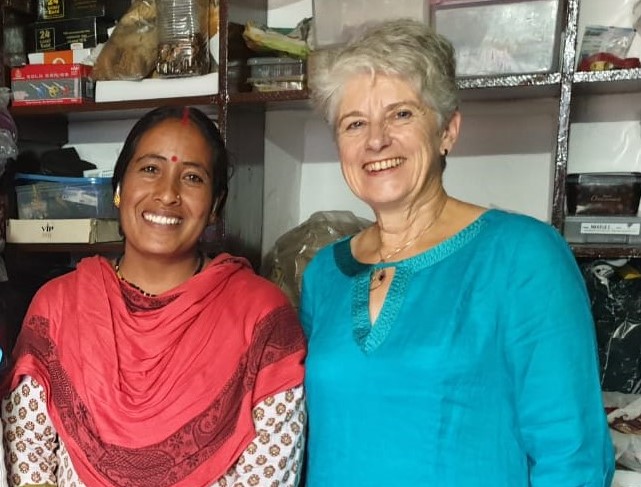 In traditional communities in rural India it is common that mothers-in-law decide about their daughters-in-law’s future. Manju Rana, who lives at the lower foothills of the Himalayas, is an exception to that tradition. Her mother-in-law objected to Manju working outside the house, but her husband supported her and so, Manju is enjoying the work she does at Women on Wings’ partner Kumaun Grameen Udyog.

The joy of creating
Manju Rana, aged 31 years, is happy to talk to Women on Wings’ expert Anita Joosten who had come to the mountain area to work with KGU’s management on on structuring its financials. Manju started working at Kumaun Grameen Udyog (KGU) long before her marriage. As a teenager she accompanied her sister who already worked at KGU. Manju enjoyed watching her sister and other women creating beautiful knitted stoles and sweaters. At the age of sixteen, Manju had to stop her studies due to family circumstances and she too started working at KGU. Manju’s hunger to elevate her family’s financial status and her natural ability helped her pick up the knitting work quickly.

Supportive husband
After seven years of enjoying her work at KGU and the income it brought, Manju got married at the age of twenty-four and came to live with her husband and in-laws. Her mother-in-law objected to Manju working and demanded she would only look after household chores. Luckily her husband overruled his mother and Manju continued doing the work she loved so much. She did take a gap of three years after the birth of her two children, but she could not forget her days of financial independence. Manju also realized that her income could send her children to school and increase the family income again, so she happily regained work at KGU.

Support from mother-in-law
Today, Manju not only knits, but also trains other women and is a full-time employee earning a good salary. She works a 9-to-5 day and is now getting support from her mother-in-law to manage both her household chores and her job at KGU. Said Manju to Anita: “I have full freedom of how the money that I earn is to be spent. It is additional family income and little treats for me and my children. Most importantly, I am educating my two children. Like many of the other women who work at KGU, I ensure that my income is used for a better future of my children and my family. To be able to do that makes me extremely happy and proud.”

Women on Wings and KGU partnership
KGU ploughs back all profit into rural development activities in the Kumaun region at the lower foothills of the Himalayas. KGU sells various products under its brand name Kilmora, which include hand woven and hand knitted textiles, apricot skin care products, organically grown culinary herbs, cereals, spices, jams, chutneys and juices. In a region largely dependent on subsistence agriculture and a variable fruit crop, KGU’s outreach gives a meaningful income to the rural families it is involved with. KGU and Women on Wings started collaborating in 2017. Since then, Women on Wings’ experts worked with KGU’s management on improving and scaling its processes and business results.
Picture: Manju Rana and Anita Joosten