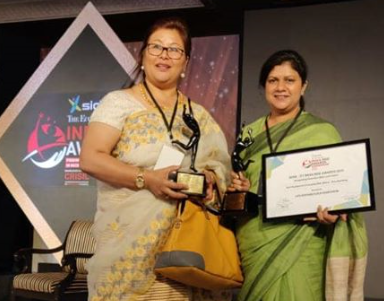 Two of Women on Wings’ partners stood out at the Small Industries Development Bank of India and The Economic Times MSE Awards on October 16 in New Delhi, which aimed at finding tomorrow’s business leaders. Ms Shubhra Devi, founder of Meira Foods and Ms Anjali Singh, founder of Jute Artisans Guild Association, were two of the awardees.

Finding leaders of tomorrow
The awards are celebrating those Micro and Small Enterprises (MSEs) that have contributed to the ‘Make in India’ initiative and that can be an inspiration to millions of other enterprises across the country. The awarded MSEs are eligible for mentorship by leading business personalities and capacity building at premier institutes, enabling them to become business leaders of larger enterprises tomorrow.

Best Employment generating MSE
The judges interviewed all nominees. They asked Ms Anjali Singh (picture right), founder of Jute Artisans Guild Association (Jute Artisans) from Lucknow, Uttar Pradesh, for instance about her challenges faced, the marketing strategies and the next 5-year plan of the social enterprise. Women on Wings and Jute Artisans started partnering in July 2018. Since then, the social entrepreneur has been eagerly using Women on Wings’ mentoring and business consultancy services to grow her company. Over the course of one year, the number of artisans involved has increased significantly which is also being recognized by the judges of ‘SIDBI-ET India MSE Awards’. According to the judges, Jute Artisans has made an exceptional contribution towards employment creation both in terms of number of employees added and growth in employee base and therefor was granted the Award for Best Employment Generating MSE.

Woman MSE Achiever
Ms Shubhra Devi (picture left), founder of Meira Foods from Imphal, Manipur, shared with the judges how she had started her enterprise in a region with many challenges. However, she was determined to provide employment to as many rural women from Manipur as possible and persisted in building a state-of-the-art processing unit. Women on Wings and Meira Foods started partnering early 2019. In a number of online and onsite workshops, the two teams worked on Meira Foods’ business plan, jointly set goals and priorities, and put an action plan in place which is reviewed on a regular base. According to the judges, Shubhra Devi is an outstanding entrepreneur who holds majority stake in her business and has shown an excellent record in establishing and leading a successful business and therefor was granted the Award for Woman MSE Achiever.

Recognizing important sector
The Micro, Small & Medium Enterprise (MSME) sector is critically important for India’s economy. This sector is one of the principal contributors to Gross Domestic Product (GDP), exports and employment generation in the country. Small Industries Development Bank of India (SIDBI) and The Economic Times (ET) have joined hands to create ‘SIDBI-ET India MSE Awards’. The awards are intended to promote, encourage and recognize the efforts of those MSE entrepreneurs who have developed and grown their enterprises.

← India; one country – many faces
Fallen oranges impact lives of Lakshmi and Anjanama →