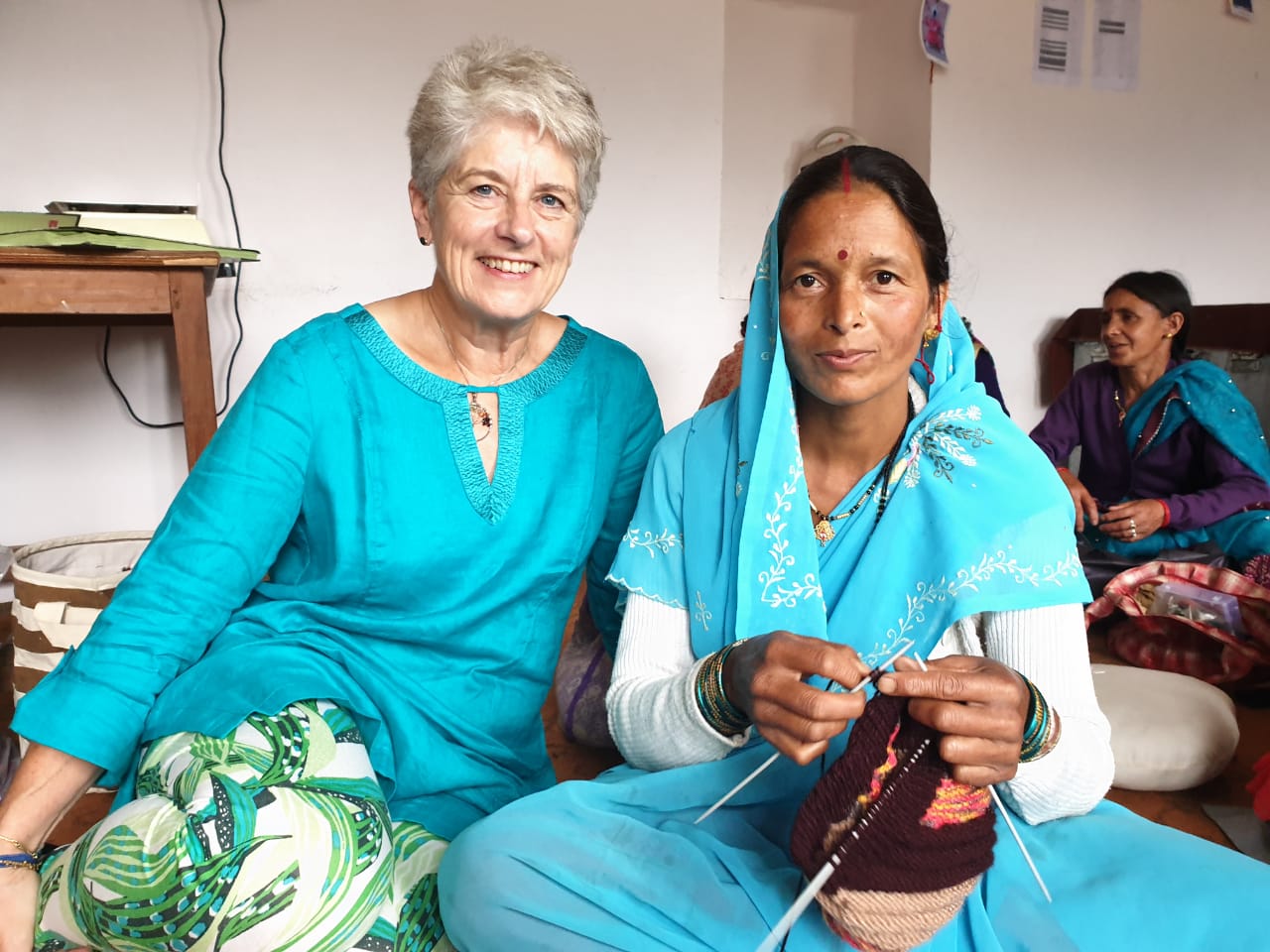 Small curvy roads lead to tiny settlements in the lower foothills of the Indian Himalayas where local families do their best to earn a living in agriculture and handicrafts. Like Gopuli Devi, who works at Women on Wings’ partner Kumaun Grameen Udyog.

Living the rural life
Gopuli, picture right, is somewhere ‘in her early forties’. She was not registered at birth, like many people in rural India. When she was a child, it was also common in rural India that girls did not go to school, or just a few years. Gopuli went go to school up to class 3. From then onwards, she had to support her mother doing daily household chores. Gopuli was married off at the tender age of sixteen, which in the villages was a reasonable age in those days. Fortunately, rural India has developed over the years. New laws make sure girls are not left behind with regards to e.g. education and India leads South Asia with its rapid decline in child marriages (source YourStory). Many child marriages have been annulled in the past few years.

Money of her own
Inspired by other women in her village who had attained financial independence, Gopuli started working in 2015 as a knitter at Kumaun Grameen Udyog (KGU). This work can be done from home and gives her the flexibility to do other household chores, like farm work, looking after domestic animals and collecting fodder from the mountains. Sometimes Gopuli works one to two hours per day, sometimes more. She earns a minimum of 800 to 900 Rupees (10 to 11 euro) per month which is additional family income and entirely managed by herself.

Educating daughters
Women on Wings expert Anita Joosten, picture left, had the pleasure of talking to Gopuli when she worked with the KGU management on structuring KGUs financials this summer. Gopuli: “Having a nuclear family, I luckily did not face any resistance when I wanted to work. I have two daughters and one son. But I am educating all of them. I ensure that my girls get all the opportunities that I didn’t get. Working at KGU gives me the opportunity to be financially independent. I feel I now have more self-confidence and self-esteem, because my income contributes to my family’s and particularly to my children’s future. I want to teach my children that they can take their future in their own hands. But education is key for a better future.”

Women on Wings and KGU partnership
KGU ploughs back all profit into rural development activities in the Kumaon region at the lower foothills of the Himalayas. KGU strives to give quality and a fair deal to both the customer and the rural producer. KGU sells various products under its brand name Kilmora, which include hand woven and hand knitted textiles, apricot skin care products, organically grown culinary herbs, cereals, spices, jams, chutneys and juices. In a region largely dependent on subsistence agriculture and a variable fruit crop, KGUs outreach gives a meaningful income to the rural families it is involved with. KGU and Women on Wings started collaborating in 2017. Since then, a number of Women on Wings’ experts worked with KGUs management on improving and scaling KGUs processes and business results.