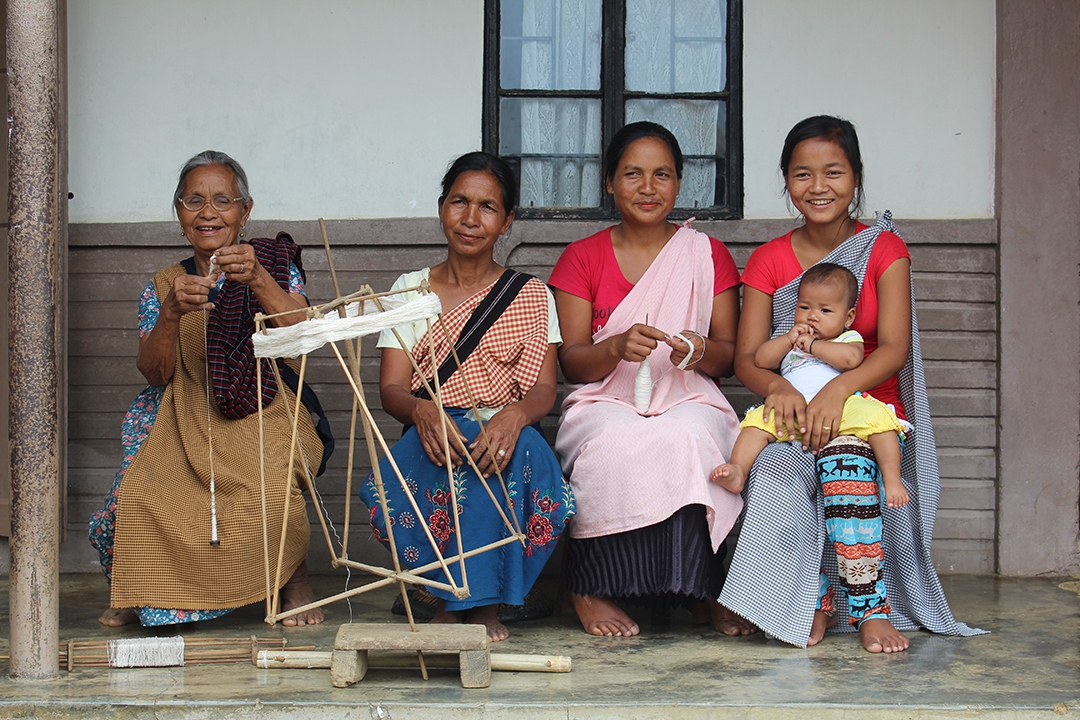 Eri silk is the only silk that allows the worms to turn into butterflies and leave the cocoon before harvesting the silk. It is therefore also called ‘Ahimsa’ or ‘non-violent’ silk. Women on Wings’ business partner Fabric Plus’ flagship product is Eri. Fabric Plus is an important domestic Eri and Muga silk supplier and also exports the silks to high end global brands.

Entrepreneur hooked on textiles
Fabric Plus’ founder and CEO, Dilip Barooah, hails from Margherita, Assam, where it is all about coal mines and tea plantations. As a child, he never thought about textiles. Instead, growing up with five siblings and seeing how that took a toll on his father to provide for the family, Dilip’s primary goal was to become self-dependent. After trying a number of jobs, Dilip chanced upon the Assam Textile Institute in Ambari. The lure of hostel facilities and scholarships was enough to get him interested, but what helped him get really hooked were, in fact, the textiles. “The dots connected”, Dilip says reminiscing about the past.

Domestic and global experience
Dilip passed the Assam Textile Institute with flying colors and got his first job in Mumbai. After that, he worked in many different companies in India and abroad. He even completed a project in Assam during the early days of his career but he did not stay. Until he heard a call to come back and start something of his own. Says Dilip proudly: “The former CMD of NEDFI and the then Minister of Development of North Eastern Region gave me a chance. Fabric Plus started in 2003 from Mumbai with a small unit. Presently, we have 500 employees and about 46,000 people indirectly associated with the company.”

Weavers get better value
Thanks to introducing technology to the cycle, weavers are now getting more value for the Eri. Today Fabric Plus is able to weave much more meters of fabric from the same quantity of silk. It now uses more raw materials and affects more lives. The weavers are getting better value, they are more motivated, and production is going up which means that the whole value chain is becoming richer.

Involving more rural families
Fabric Plus’ spinning and weaving units employ 100% local workers, out of which, 85% are women. Their products reach domestic and global end consumers. Says Dilip: “We work with high end –global – brands and a big company in Geneva. We are also doing a lot of Research & Development with partners in Europe in creating a new product which was never been attempted before. Earlier this month Fabric Plus celebrated its fifteen anniversary. We’ve come a long way and there is still a long way to go, but we are expanding. I want to involve more rural families in Assam.”