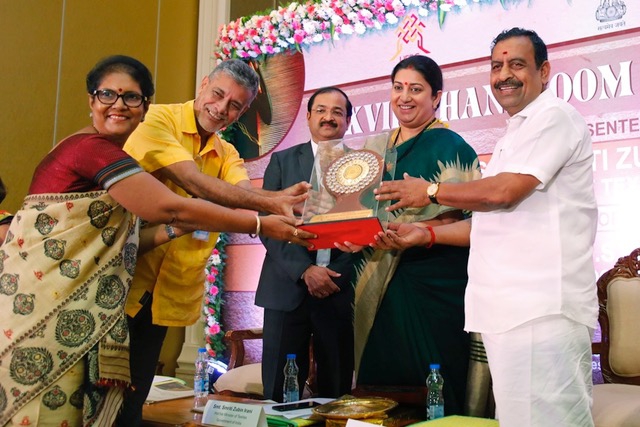 Women on Wings’ partner Fabric Plus has created significant impact to thousands of families in rural North Eastern India. On July 6, 2018, Fabric Plus received Best Handloom Exporter Award from North Eastern India at the 28th National Handloom Award function in Chennai. Union Textile Minister Smriti Irani felicitated handloom weavers and exporters from across the country for their excellence in respective categories of the handloom sector.

Non-violent silk brings employment
Guwahati based Fabric Plus is a manufacturer of yarn, fabric and apparel using exclusive Eri and Muga silk from Assam. Entire families find employment in the rearing of silk worms, like those of the Eri silk. The Eri moths leave the cocoons before processing the silk, therefor it is called non-violent silk. Women spin the silk threads into yarn which is then being used by the many women weavers that find employment through Fabric Plus. Fabric Plus and Women on Wings are partners since 2009.

Proud but work to do
Speaking to Textile Excellence Magazine after winning the Gold Trophy, Dilip Barooah, Managing Director of Fabric Plus said “We are feeling proud to get recognized as Best Handloom Exporter from North Eastern region. At the same time, North Eastern India, in spite of having highest handloom density in the country, no other company could manage to get any award. This is sad and indicates that we must work on it.”
The award function was organized by Handloom Export Promotion Council under Ministry of Textiles, Govt. of India.