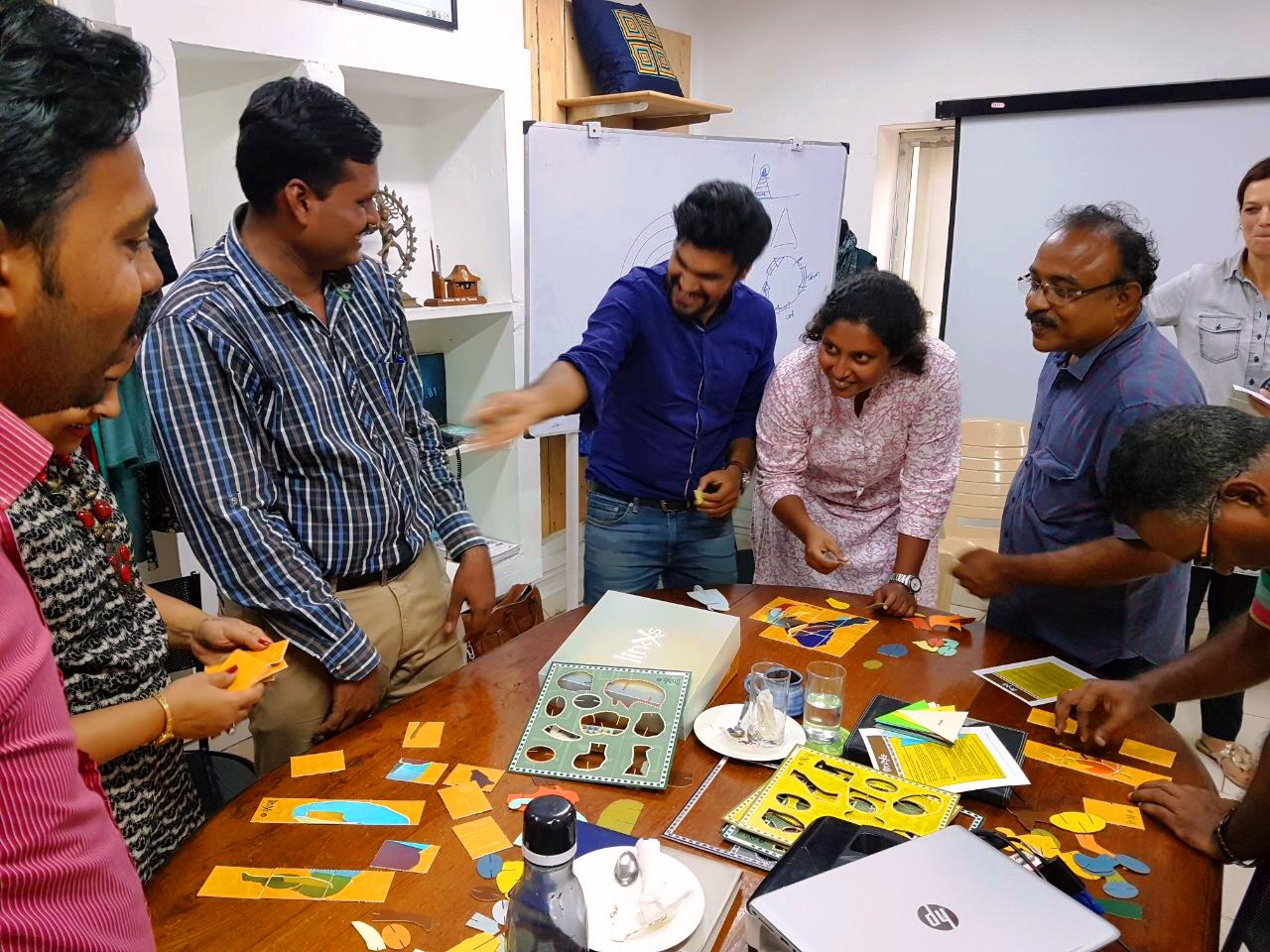 Early August I went to Mandala again, in Pondicherry, at India’s south east coast. After the inspiring teambuilding workshop last February Ronald van het Hof, joint MD Women on Wings, and I had planned a follow up visit. This time unfortunately, there was no time for a little sightseeing at ‘Pondy’.

On Wednesday we received a warm welcome from Anjali Schiavina, Founder and CEO of Mandala, and her team. Since my last visit the management team had grown to twelve members. Topics of the workshop in February were collaboration, creating synergy, the desired basic attitude of Mandala employees. Now the goal was to take a deep dive into the same.

Building a successful team
After a short introduction and retrospect we started to discuss the current phase of the team according to the model of Lencioni. What did they work on and which progress was made during the last months. The next step was to practice with the Belbin roles again. The better you know the roles, the better you are able to build your team, putting the right person on the right task, and knowing the pitfalls of the team. The new team members also made a Belbin test so the team overview was completed.
Because I’m convinced that ‘learning by doing’ gives a lot of fun as well as it is more effective than sharing only theories, we played a Management Game. The team was divided into four groups and each group had to build a construction from pieces of a puzzle. Since those pieces were divided over multiple teams, the first challenge was finding out what construction it was they had to build.

Making a stronger cooperation
The last day at Mandala we worked with the members of three departments who were divided into four groups. Each group had to build a tower of cards; the highest tower would win. Amazing to see how some team members changed from being reserved to active! The last part of the workshop was a role game; we played a situation with an unsatisfied customer who is complaining about a delayed delivery.

And fun it was these three days! All team members were very eager to win and nothing was spared to get the best result in the various games. Afterwards we had a very open discussion about all the do’s and don’ts that were manifested during the games. That gave a lot of insights and I’m sure it helps to further improve the Mandala way of working.

Management Game LinkXs
Thanks to #InContext #Karin Vrij for making it possible to play the Management Game! InContext management games are the most engaging way to develop knowledge, insight and awareness. They facilitate an intense dialogue about key themes such as vision & strategy, core values, team collaboration, culture, integrity and diversity. They show how each individual can make more impact.

For me, again, it was a great pleasure having the opportunity to work with the Mandala team! It is a very open atmosphere with enthusiastic people and sharing knowledge is always a two-way of learning.