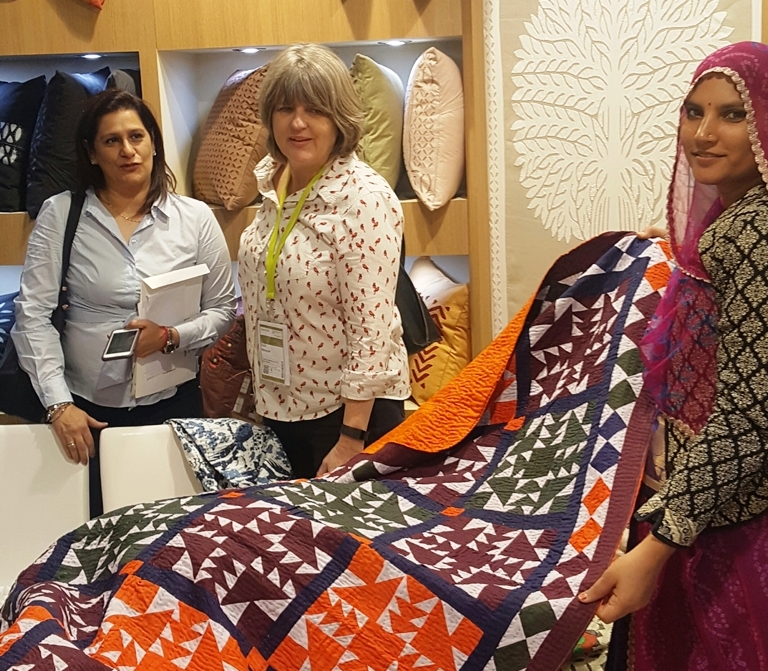 Music, embroidery and bright hues with beautiful motifs, inspired from their daily lives, bring joy and color in the lives of many rural women in the Thar Desert. Life is very difficult in this part of India with hostile weather and living conditions.

Development in the Thar Desert has always been very slow due to frequent droughts and scarce accessibility of utilities like roads, electricity and water. Handicrafts became an important means of livelihood for the women, apart from being their cultural lineage.

Ruma Devi is one of the many female artisans from Barmer, at the far west side of the Thar Desert, close to the India-Pakistan border. She dropped out of the school in standard 8th because of the dearth of money and to look after her siblings. For Ruma Devi embroidery was a part of cultural inheritance from her grandmother like it is for most women in Marwar region of Rajasthan. Ruma Devi recalls that she started this craft enthusiastically preparing her own trousseau before it became means to livelihood. She was married to a small farmer when she was 16, but continued her applique work for the love of it and also for her family’s livelihood.

With commercialization of the craft, middlemen started exploiting them by paying off meager amounts or commodities in barter system. Quality was compromised and love for this art kept loosing. Ruma Devi had no idea of the market price of the product which was many times more than her earnings. With no means to access the end buyer directly and a high dependency of exploitative middle-men, at one point of time Ruma Devi like many other women artisans, was compelled to leave this craft.

When GVCS was conceived to preserve the craft and to uplift the lives of women artisans, Ruma Devi found her cause. She started encouraging other women to take up the craft again and made them aware of their rights, fair trade and wages. It also became platform for her to address social problems like child marriages, domestic violence, malnutrition, girl child education. Today she is president of GVCS and is helping other women artisans to upgrade their skills and develop entrepreneur skills. She even travels to exhibitions in Europe where GVCS finds a growing market for its exquisite handcrafted products.

Women on Wings and GVCS partner since Autumn 2015. At that time 3,000 women were engaged with applique work for GVCS. Today, that number has increased to 4,000 women.