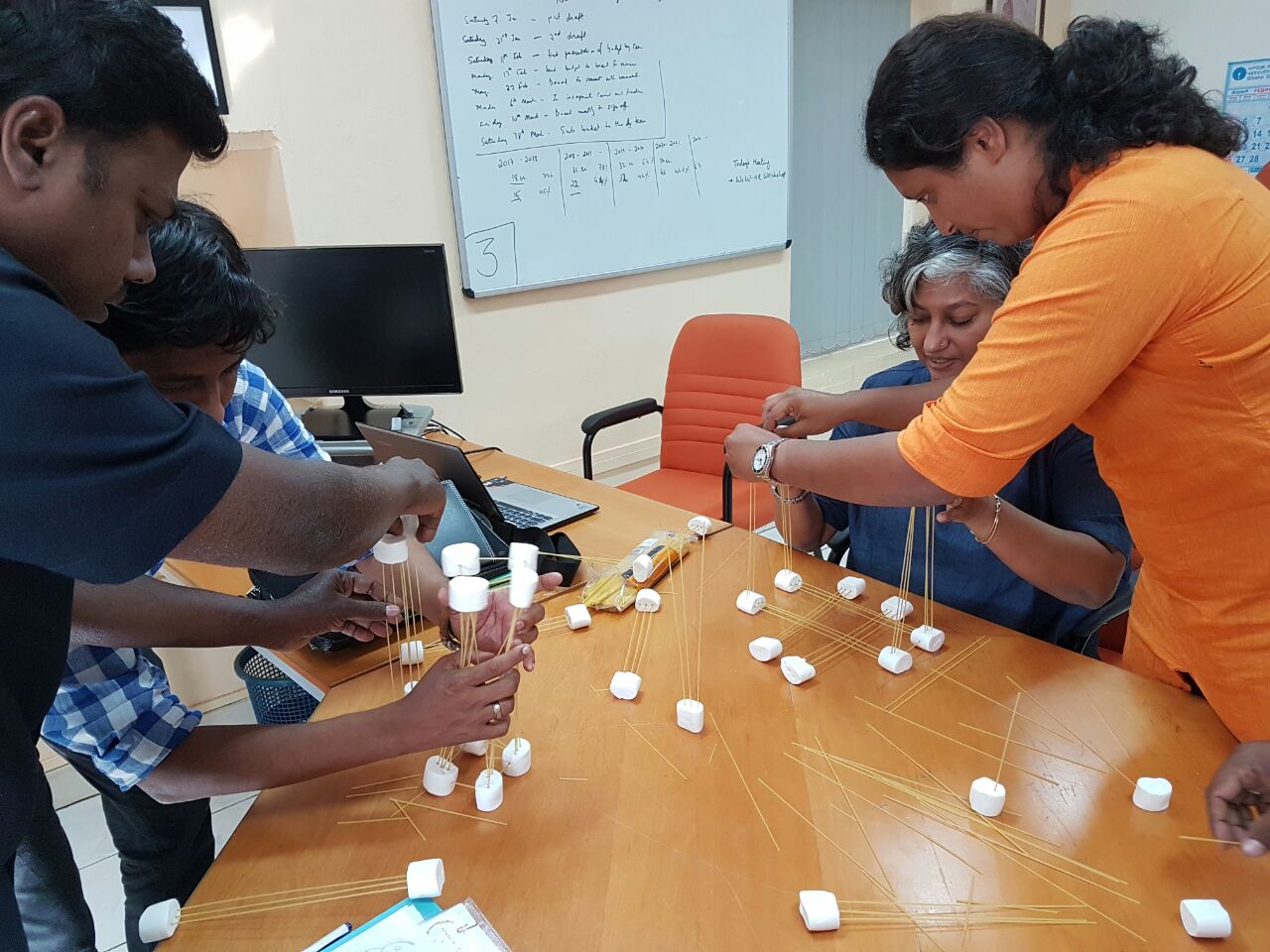 Women on Wings’ partner Mandala Apparels was founded to bring about a positive impact in the fashion industry in India. Mandala, which operates from Pondicherry, southeast India, has a holistic integrated supply chain, from the organic cotton female farmers to the women who produce the infant, kids and adults garments and soft toys to the final product for export. It aims to grow and keep evolving, transforming the impacts on society, economy and ecology allied to the apparel industry.

Understanding the principles of a good team
To grow a company, it is important that the people involved work as a good team. But what is ‘a good team’? Esther Goethart, expert at Women on Wings, and Ronald van het Hof, joint MD at Women on Wings, took the Mandala team on a journey creating a common understanding about ‘conscious business’ and ‘a good team’. Esther: “After the theoretical introduction it was time for some practice! The team was divided into two groups. Each had to build a tower, using spaghetti and marshmallows. Besides the fun, the purpose was to see if the teams measured up to their definition of a good team. Like, did they discuss the strategy before starting, was there clear communication between the team members, was there clear understanding about mutual roles. And of course, the team with the highest tower won.”

Added value of Women on Wings
Anjali Schiavina, Founder and CEO of Mandala Apparels, worked with Women on Wings experts before: ““Each session with Women on Wings brings around a lot of clarity. We work mainly intuitively and Women on Wings looks at our organization from a business perspective. Last year we had three workshops, which were all so valuable for us as people and as a company. That’s why I requested a team building session, to build a successful team and make the next step in our growth. I see our growth happen thanks to the various sessions with Women on Wings.”

How to build a successful team
One of the factors of a successful team is having a variety of team roles. Each member of the Mandala management team completed a Belbin test. The results gave a lot of insight in the strengths and weaknesses of the individuals, as well as of performance of the team. Possible dysfunctions of a team were discussed according to the model of Lencioni. His ‘Five Dysfunctions of a Team’ model outlines the root causes of dysfunction on teams and the keys to overcoming them.

The impact of the partnership
Mandala and Women on Wings partner since 2015 in realizing the growth plans which include a strategy and business planning roadmap, marketing & branding strategy and organization development. This will result in new employment opportunities for over 5,000 female farmers in organic cotton and in the production of its Fair Trade children’s and women’s wear by 2020.