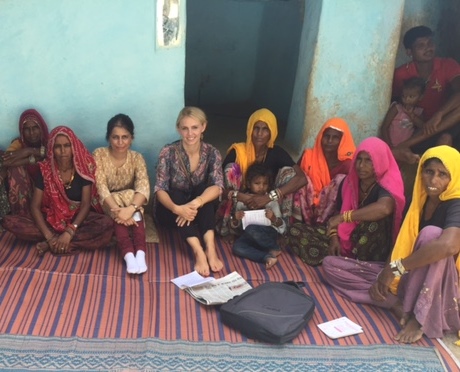 My first field visit with Women on Wings was together with Supriya Kapoor to have a workshop review of the process operations at Maitree Mahila Dairy, in Tonk area in Rajasthan. I have been in Rajasthan a few times but never seen it so green before. We are travelling to the Tonk area during the end of an unusually good monsoon season. What is normally a semi-arid, desert like landscape is now lush, green landscape full of ponds and streams. Our driver tells us that water flows in the Banas River we pass for the first time in 15 years.

Maitree Mahila Dairy is a company owned by its producers, as a way to market their milk and gain a steady stream of income. Mahila is Hindi for woman, and Maitree is currently covering 65 villages and 1,500 female producers – but their aim is to expand much farther than that. Although every producer is small-scale (averaging two animals per family), it is an important added income to rural women that often have very small means of generating cash income of their own.

Maitree is developing their processing operations and has installed a pasteurization plant where all the milk will be treated. Up until now, the milk has mainly been sold untreated in loose, unpacked form. Milk is of course a highly perishable commodity, especially in the hot summers in Rajasthan, thus keeping the milk and transport to market is an issue. Pasteurization will further increase the shelf life of the milk, enabling to sell the milk at further markets and meeting new market demands. Thus, it is a key step towards securing and increasing the revenue stream generated for the village women.

We spent an interesting day together at the Maitree office and the new pasteurizing plant, followed by a day of visits to villages and milk collection centers. The women managing the Village Development Center (a milk collection center with extension services such as advice and training) we visited clearly take pride in maintaining the facility and its operations in a good way. The workshop was focused on current operational practices, identifying gaps and discuss best practices and future improvements in their operations. Maitree will have a fresh start with the new plant and there is a lot to learn – and the Maitree-people are eager learners and full of ideas and initiative.