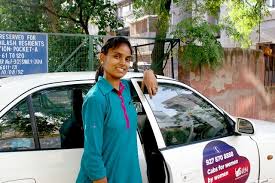 Female cab drivers are still a rare phenomenon in Delhi. Last week in Gurgaon, Ronald and I met a lady from Women on Wheels; Cabs for women by women. Some five years ago, Women on Wings supported this company in developing its business plan. In a competition hosted by BiD network, Netherlands, Women on Wheels won the award for best business plan in June 2010. But since they work in the city and we focus on rural India, our roads separated. Nevertheless I’d like to share how bold they were and what a great impact they had in changing mindsets related to female cab drivers.

Perseverance to become female cab driver
At the start of Women on Wheels, there were four female drivers. Today, they have as many as sixty female drivers! Women on Wheels not only trained the women in becoming cab drivers, they also taught them how to defend themselves. Being out at night on the roads is not always safe. But most challenging was to convince the parents and family that being a cab driver is a good and interesting job, also for women. Perseverance was needed.

Change in acceptance
Although the number of female cab drivers is not enormous, it had an impact. Recently a well-known cab company, Meru Cab, took over eight female drivers of Women on Wheels and called this special female team ‘Meru Eve’. They drive in recognizable white and pink cars. So the beginning is there to become mainstream. On top of this, last week Delhi announced to have the first female public bus driver and guess what, she was also recruited from the Women on Wheels team.

A great example of how having a bold idea can create a true shift in the cab landscape.

Queen of Raw – saving the world, one yard at a time

We are hiring: Community Manager

Artisan Sapna on cover of book about change makers

Women in leadership towards an equal future

We are hiring: senior business consultant