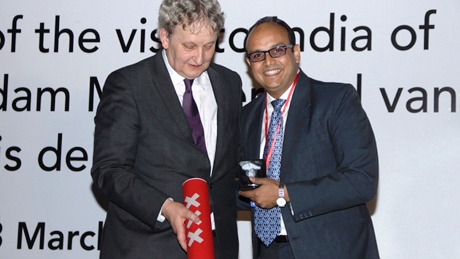 On March 23, Vikas Chaturvedi, member of the Dutch board of Women on Wings, was awarded the Frans Banninck Cocq penning by Eberhard van der Laan, Mayor of the city of Amsterdam, during his trade mission to India.

Support by bridging the gap of cultural differences
Vikas Chaturvedi is, amongst others, a founding director of the Netherlands chapter of the Europe India Chamber of Commerce (EICC). According to the Mayor, Vikas’ business contribution to the city of Amsterdam and the collaboration between Amsterdam and Mumbai in specific through his work for EICC, are the reasons for awarding him with the prestigious penning. Since many years, Vikas Chaturvedi is committed to the promotion of Amsterdam in India. He has a lot of knowledge of both the Dutch and Indian culture and knows like no other how to bring his large network together, in and outside these cultures.

Award for longtime exceptional contribution to Amsterdam
The Frans Banninck Cocq penning is awarded to individuals who have made exceptional contributions to the city of Amsterdam during a period of at least twelve years. They are people who have had (paid) positions in various committees and foundations committed to work for Amsterdam by any means and in any area, like sports, science, journalism, art, politics, and economics, nationally or internationally oriented.