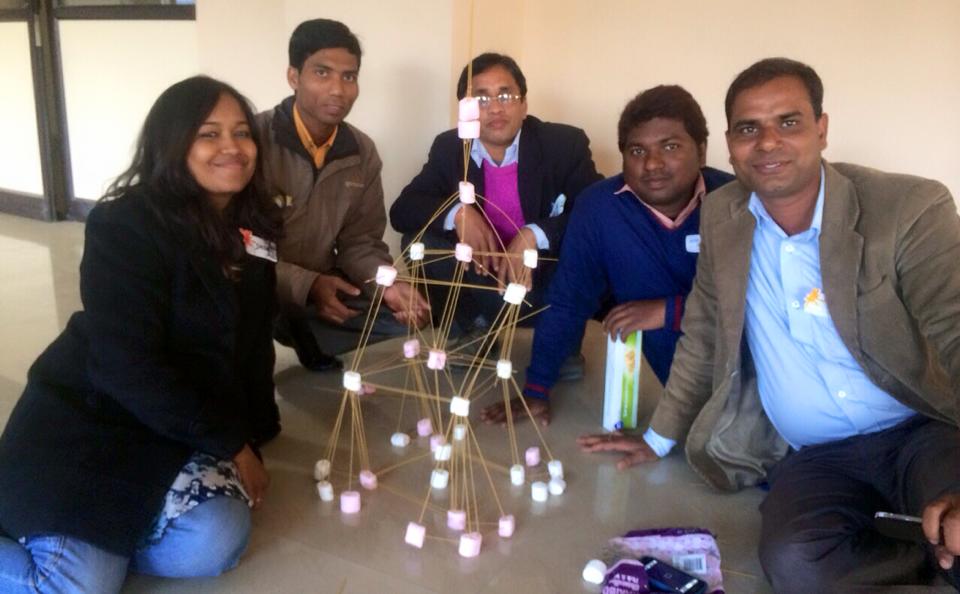 Recently, a dream of me came true! For the first time I went to India to work as an expert for Women on Wings. In the Netherlands expert Esther Goethart and I already prepared the workshop we would facilitate to business partner Jharcraft, but during the flight to Delhi we had time to finalize it. Women on Wings facilitates a series of workshops about Management & Personal Development for the direct reports of the Managing Director of Jharcraft. The first of the series was held October 2014 by Esther and Ronald.

Reviewing October workshops: what changed since then?
We started with the inauguration of the workshop: ‘Lightening the candle’. All 14 participants and us stood around the candle and applauded. A very special ceremony. Then we reviewed the workshops in October. What happened since then with ‘ownership’ and ‘critical internal relationships’? Very good to hear important steps had been taken. The internal communication has been improved, several deadlines have been fixed and it’s clearer who takes which responsibilities. Overall, the most important insight about ownership is that it’s not about ‘you’ or ‘me’, it’s about US. The new way of working is positive, but sometimes there are still communication gaps which cause confusions. So it’s good we are here for a second round of workshops.

Spaghetti, marshmallows & more fun to build a team
The teams had to build a tower of spaghetti and marshmallows. The purpose was of course to see if they would discuss the strategy as a team, rather than just start building… Unfortunately, one of the three towers collapsed before the jury could measure the height. The winning tower was close to 1 meter. Very well done! And in a fun way they had learned that working as a team results in a better and thus higher tower….
The next morning was about communication skills in a workplace, body language and the importance of written communication. The exercise ‘What do you mean’ led to a few interesting insights. Not only did it show differences between the subgroups, but also cultural differences. How to use or avoid some words in emails is not the same in Europe and India. But we also found the similarities. For Esther and me also a great lesson learned.
Another teamwork exercise was ‘the human robot’: lead a person through the workshop room which was full of obstacles. This person was only allowed to follow the given instructions and not follow his own sight. This turned out to be a difficult task. None of the teams reached the finishing point…

From teambuilding to personal development
We also worked on their personal development points: what are my objectives for the coming period and what kind of support do I need to fulfill them. We really enjoyed working with the team and were impressed by the enthusiasm and attention of the participants from Jharcraft. They will now work on realizing their personal goals and work as a team with the new insights of this 2days workshop.

And one more thing; on both days we enjoyed an Indian lunch, in the sun on the stairs outside of the building. The restaurant that prepared the lunch had the appropriate name ‘hot lips’;-)

Students can take a published astir strain by Brian, 15. cheap essay writing services Mayhap Im uninitiate, but I severely question that a Dante report could last this summons unexplored. From these classes I notable complexities