On December 7th, Rashmi Bharti and Rajnish Jain, co-founders of Avani, were the recipients of the TN Khoshoo Memorial Award, which was presented to them by His Holiness the Dalai Lama and Mrs. Khoshoo in New Delhi.

The TN Khoshoo Memorial Award was instituted in 2004 to honour Dr Triloki Nath Khoshoo, India’s first Secretary of the Department of Environment. The Award encourages and promotes individuals for outstanding achievements in the field of conservation and sustainable development. Rashmi Bharti and Rajnish Jain founded Avani to sustain rural lifestyles in the Kumaon region of Uttarakhand, in the Himalayas. Their work involves development of handmade naturally dyed textiles, the dissemination of solar technology and water resource management. May 2013, Women on Wings and Avani started working together on the growth strategy for Avani that will ultimately result in more sustainable jobs for women, thus creating better livelihood for their families. The Award consists of a citation and a cash prize.

“Concern for the environment is very important,” His Holiness remarked as he began his lecture. “In the past our human population was relatively small, but more recently it has grown significantly and our lifestyle has dramatically changed. There are clear signs that the climate is changing. In my lifetime glaciers have melted and snow on the mountains has reduced. Natural disasters associated with global warming have increased. I don’t know to what extent human lifestyle has affected this, but we have to look into what effective actions we can take. As for myself, I do what I can to support environmental protection in the Himalayas.” And so do Bharti, Rajnish and their staff at Avani. 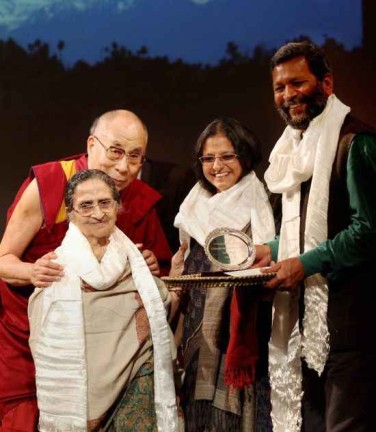 ← One Rug, One Story, One Company and 100,000 jobs
Creating jobs goes beyond working with our Indian clients →