The number of jobs created has increased to 95,200. This growth means we are on track because, with an annual doubling, we will be able to realize our ambitious goal of creating 1 million jobs for women in rural India in ten years’ time. Founders Ellen Tacoma and Maria van der Heijden explain: “Of the 1.2 billion people living in India, more than 300 million of them are women from rural areas who live on less than 2 dollars per day. Our aim is to strengthen the economic position of these women and their families through job creation. A job means an income for women and offers them the chance of economic independence, more self-esteem, greater purchasing power and thus a better social position. A chance for a better life for herself and her children. What we have achieved after six years is that 95,200 families now have two meals per day and, more significantly, about 250,000 children are no longer malnourished and can go to school.”

On Tuesday, September 24th, Willem Lageweg, Chairman of the Board of Women on Wings , unveiled the actual number of jobs created, in the presence of nearly 80 guests, at Women on Wings’ 6th anniversary party at the AkzoNobel business center in Amsterdam.

This strong growth in jobs has been realized, in part, with the help of Jharcraft in the Indian state of Jharkhand. As Dhirendra Kumar, Managing Director of Jharcraft, explains: “This year, the number of jobs for women in silkworm cultivation has increased by over 30,000. Thanks to our partnership with Women on Wings, our management is better organized, we now have better production control and we have greatly reduced our stock. We have also increased our brand awareness. With better quality control, we are able to supply to large retailers in India. Women on Wings is an important partner for us.” 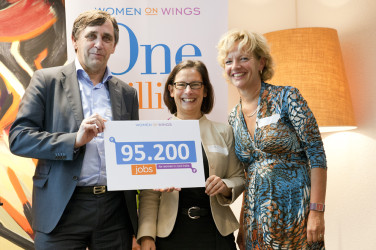 ← Vijf wetten van internationaal zakendoen
“I have learned to observe rather than just look” – Sairam Iyer, Ode to Earth →