Thanks to regular collaboration, a good bond has been created between the Fabric Plus board members and the Women on Wings experts. This has allowed for a crucial assessment of the board members in order to help them stay inspired to make the best of themselves and of their team. And it’s worked: Fabric Plus has made significant strides in entrepreneurship. Something that has also been underlined by the Indian government.

Last November, the factory managers – where the garments are spun and the silk materials are woven – became involved. The factory is, after all, a hugely significant link within the entire chain. Expert Ronald van het Hof carried out a SWOT of the factory in Assam, in northeast India. This showed that only 70% of production volume was being utilized. Nahata CS, Business Unit Director of Yarns, had actually indicated shortly before this that there was the possibility to double turnover thanks to new orders. Work started immediately with the teams on planning the increase in production volume.  Dilip Barooah, CEO of Fabric Plus, said afterwards: “These were the most effective meetings ever.” Ronald is proud of the development of Fabric Plus: “I am very much in awe of these Indian entrepreneurs who work every day on creating jobs for women in rural areas. They are incredibly driven.”

It’s something that has also been recognized by the Indian government: on November 20, Dilip received the prestigious 2012 Indira Gandhi Priyardarshini Award in New Delhi for his Outstanding Services, Achievements and Contributions on the eve of 95th birth anniversary of late smt. Indira Gandhi on 20th November, 2012, New Delhi, which includes contribution to improving living conditions of the rural Assam and the North-East. It is a huge validation for Dilip and his team and an incentive to realize the ambitious plans and dreams of Fabric Plus. This will continue to help the growth in jobs in 2013. 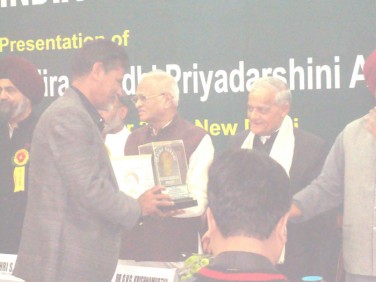