To start a business without saying a prayer is unimaginable in India. It could mean that you won’t make a profit or that other problems might arise. And so a puja (prayer) was held for the first activities of the Business Support Centre (BSC) Women on Wings is building in the Mango Garden in Varanasi: drilling for water.

The large drill was already prepared and the drill technician was present with two helpers. The exact site, publicized following the drawings of the architect, was once more measured by engineer Bram de Vries, who worked on the operational side of the organization as well as to the implementation of the sanitary pads production and the BSC, and Dipti, manager of the BSC. A coconut, cloth (with the svastika as a sign of prosperity), incense, sweets and Henna powder were purchased. Rohit, the husband of Dipti, led the rituals of the puja with Bram as the Dutch representative. Incense was burned, the coconut piece was beaten and everyone present received the blessing by way of a red dot on their foreheads. Finally the blessed sweets were distributed, the drill technician received 100 rupees for his good work and to appease him and we returned to the pilot plant. Through this prayer for water, a God in India, the BSC will be assured of clean and clear drinking water that will never stop flowing. There will be many other puja during construction and at the opening of the BSC, but the first step has been taken.

Starting the day without morning prayer in Varanasi is unimaginable. And so every day the sun is greeted with a short prayer on the rooftop of every home, every household shrine, by visiting the temple or in Varanasi or by a ritual bath in the Ganges, the holy river. 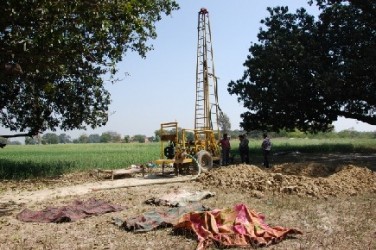 ← Let’s color Deco Magazine: On that little piece on earth we really made a difference
Jharcraft: Franchise en de flagship-store →