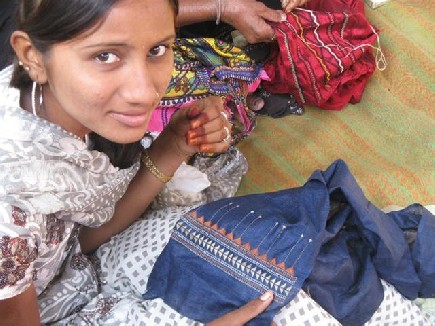 Every woman in Kutch, a region neighboring Pakistan and the state of Rajasthan, embroiders, and this critical mass of embroiderers forms the basis for many successful livelihood programs and enterprises, some of which Women on Wings visited during its exploration of the region. Women on Wings will start working with a few organizations in Kutch that are dedicated to working with artisans to keep the traditional culture of Kutch alive on various levels, primarily the skill of embroidery. Each of them is very distinct in its approach, but focused on the goal of creating livelihood.

The magic of Kutch, a semi-arid salt plain, lies in the sepia color tones that surround the people who live there. These colors are incorporated by women in their traditional embroidery. These skills are nurtured from the first day a girl can hold a needle and thread. Women on Wings was deeply impressed by the artisans, their designs and spirit and is looking forward to working with them. A small introduction:

Kala Raksha is managed by the community; the women themselves have formed a committee to coordinate the price of their works. Kala Raksha has extended its outreach by setting up a design school and a museum for the textile-based artisans of Kutch. Women on Wings and Kala Raksha will work on establishing an entrepreneurial platform for the female graduates of the school and also strengthening the brand.

Shrujan was founded in the seventies and is now a successful enterprise producing embroidered garments that are in great demand by the domestic market. Women on Wings and Shrujan will work together to increase the company’s turnover, which is by far the highest in the region.

KMVS works with cooperatives and helps them cluster together to create a movement. KMVS is a.o. engaged in dairy activities and embroidery crafts. Dairy farming is an important occupation in Kutch; the people here are traditionally cattle herders and this region has the highest number of cattle and livestock in the country. Dairy farming is one way in which KMVS and Women on Wings can connect as it is an expertise that comes directly from the Netherlands.

Women on Wings is now preparing the collaboration agreements and finding suitable experts to start work on the challenges.